The Journey of a Teacher in Tondamadka - 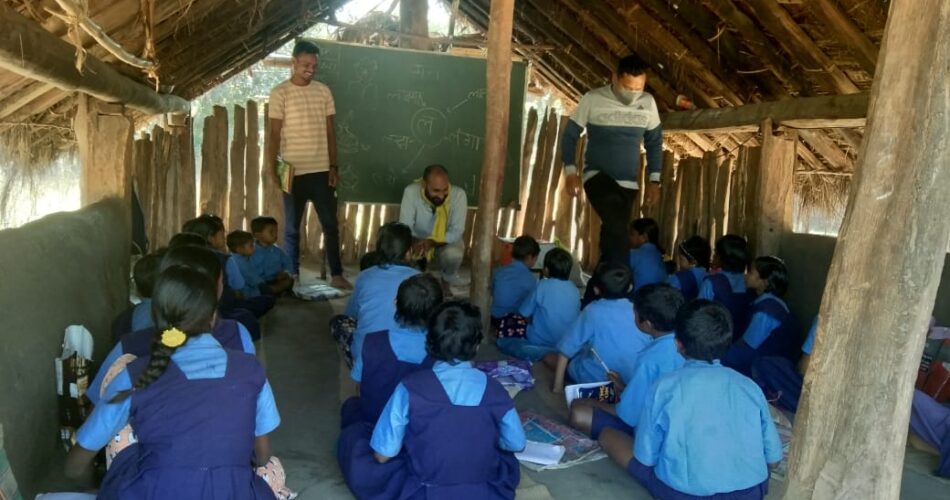 Tondamadka is a Gondi-speaking village; around 120 KMs from Sukma headquarter located in a rustic picturesque location amidst dense forests. It is a rough ride through myriad uneven jungle routes, crossing streams of river and trekking along with the Mahua and Salfie trees to Tondamadka.

The village is also a hub of Left-Wing Extremist activities, hence intensifying the challenges of its access to government schemes and benefits. The village had a government primary school built sometime in the early 90s. During the peak of Salwa Judum movement, the school was demolished by Left Wing Extremists, roads were disrupted, bridges were broken and the village was cut off from the outer world. These had enforced the children of Tondamadka to discontinue their studies, the entire lot of children in the village had gone out of school at one go.

In a step to bring back the lost children to school, the district administration of Sukma reopened the demolished school on a thatched roof supported by bamboo pillars in the year 2019. Anil, a local of Tondamadka is appointed as the teacher. Anil had a chance and resources to pursue his school education at a government residential school in the nearest district Dantewada, more than 200 KMs from his village and this qualified him to be a teacher in the newly reopened school.

The new school brought a ray of hope for the out-of-school children in Tondamadka and it registered an enrolment of 50 children in years one, 10, and 12 in the subsequent two years. Presently the school has an enrolment of 72 children, uniforms for all the children, a blackboard installed, and regular mid-day meals served.

Anil started his journey as a teacher at Government Primary School Tondamadka in an unusual setting. He shares how initially he had to play with the children for long hours to attract them towards school. He also initially had to make daily home visits of children to convince their parents to send their wards regularly to school. Shortage of resources was acute initially and Anil had to buy books and other stationeries for children using his resources.

Anil gets sad at the mention of Covid-19 induced lockdown and its future possibilities. “Had the lockdown not happened, my children would have learned to read and write better”. But he is trying his best to overcome the constraints and his efforts are visible as his children are being witnessed to be happy reading and writing on the school premises.

With his utter commitment towards uplifting the future of children in Tondamadka, he has been making sure that the attendance of children never falls below 60 on any given day, children are never devoid of Mid Day Meal, they learn to read and write and most importantly the children enjoy their tenure in the school premises. The hustle and bustle of children in the school throughout the day amidst an otherwise quiet village stands as evidence of Anil’s commitment towards the cause of education for his children.