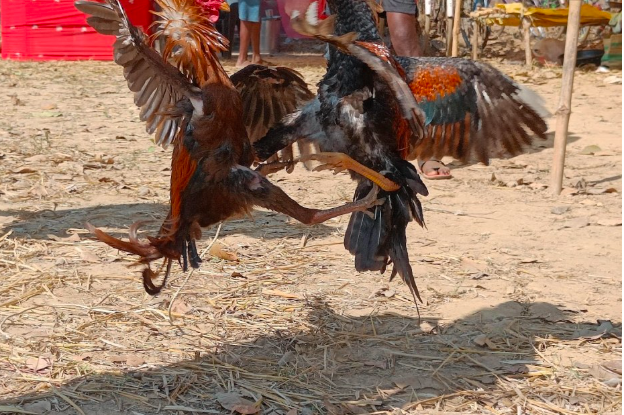 Cockfighting is an ancient spectator sport. There is evidence that cockfighting was a pastime in the Indus Valley civilization. Where two roosters will fight against each other until one of them will die. It started in Tamil Nadu, India. Nowadays the practice is widespread in coastal districts of Andhra Pradesh, including other states Odisha, Chhattisgarh and Telangana, despite being illegal in India.

I am doing my fellowship with Shiksharth Trust, based in Sukma, Chhattisgarh.  Shiksharth is working in a Naxalite-impacted tribal area to provide contextual solutions and create a safe space for conflict-affected children. This district is mostly populated by the Gond tribes who are deeply connected to Nature( जल जंगल और जमीन). They are dependent on natural resources for their livelihood. They have been following their tradition and culture for centuries. Cockfighting is (murga Fighting) one of those traditions which is deep-rooted in their culture and it’s also the source of their pastime and enjoyment. This usually starts in January and ends in June, when the monsoon starts.

This game is played on the ground covered with fences and the spectators are all around the fences. And those who will participate in the game, have to get their rooster for participation. The ground is full of cocks and there are 50 types of cocks suitable for cockfighting. But in Sukma, there are only five or six types of cocks people prefer for cockfighting. People sold these cocks to others and some outsiders came to sell and buy, few got to participate in the cockfighting and some outsiders sold the cocks to others who wanted to participate in the cockfight. The fighter cost of the roaster starts from INR 2,000 and goes up to INR 14,000 to INR 15,000 in the month of Murga Bazar( roaster Market).

So before the season of Mela began the tribes started training the cocks, by changing their diet in comparison to the other cocks. The diet for the cocks raised for cockfighting includes but is not limited to almonds, cashew, pistachio, and meat. They include rich protein food in the diet for the cocks. In terms of their training, they kept the cock in isolation where he could not see other cocks around him.

In the training of cocks they taught them some actions and behaviour patterns which help them to fight better on the battlefield. For example, the owner will hold his cock and place it on the ground and hold its tail and pull it behind. The cocks have to go forward, they go through with the same action multiple times to teach a single move. When the Mela and the season of murga fighting come closer they put their cocks in a dark room so that the rooster will get angry and get furious. I heard that some people burn the rooster to make him even angrier but I never see it anywhere in Sukma.

I heard and saw that some kind of doping is used for training and dieting the cocks in better shape and tone. Some shops in Sukma sell these substances. I asked the local people of this area what kind of doping you have been using for roasters they told me it’s a kind of steroid which help them boost their muscles and body shape.

Cockfighting begins on the day of Makar Sankranti when the villagers are free from farming activities and the mela/festival seasons are about to begin. As the major crop paddy is being harvested in the month of November-December, the farmers are usually free during the time of  Makar Sankranti, and it’s more like their leisure period.  It’s a good time to enjoy their festivals. In Melas, there is a separate section for cockfighting which is very crowded and has the attention of the villagers and outsiders. The fight starts around 2-3 pm and it goes on till 7-8 pm. The owners are ready with their roosters and sitting outside the ground waiting for their turn to come. They all register their names for cockfighting and once the organizer calls out their names, the owner of the rooster fits the blades/knife on the rooster’s right leg a little below its thumb. Meanwhile, the fights keep going on the battlefield. The spectators stand around the fence, gamble and bet on cocks while predicting who will win and whom they are betting. there are some rules for the cock fight the cocks of the same colour will not fight against each other. The winner of the fight gets the lost cock as a victory. They can either eat or sell it, depending on the winner.

“You kill, you win and you can take the cock with you”

In Sukma District cockfighting occurs in a few weekly markets. The rules of the game and its rituals are the same as mela/festivals. It’s more for the enjoyment and some villagers bet and gamble during the match.

In markets where Cockfighting took place, people were divided based on their economical status. Those sitting inside the fence are either big Shahukar, businessmen or have a good financial background and they are betting high amounts in the match. Those standing outside the fence do not have a good amount to bet. The moment cocks will enter the field spectators start betting on their favourite cock which they think will win. If you stand in the crowd, you will hear roaring sounds of betting and gambling all over the ground. When the fight is over, you see many villagers exchanging large amounts of money. When I think about all this, I get many questions in my mind. Is this a game or gambling? Is this violence or a part of an age-old tradition? Is this the play needed after a hard-working time?

“Tradition or violence against Animals”

When I came to Sukma in October, I heard from villagers and my co-workers about the Murga fighting (cockfighting). I was very excited to see the Murga fight because I had never seen or heard about it. It sounds very interesting and fun. I have to admit I had a lot of fun with that. But I found out that it’s illegal in India and the Hyderabad high court commission ordered it. “Murga fighting is part of tribal culture and Murga fight is allowed in some states but they can’t tug the blade/knife on cocks leg because it’s against Animal violations act (The Indian Penal code{IPC} 1860) Such as killing, poisoning, maiming or rending useless animals.

I wish I could solve this dichotomy and answer this question with all honesty. But the truth is that I can’t. Can you?