Lessons I Learnt From My Kids - 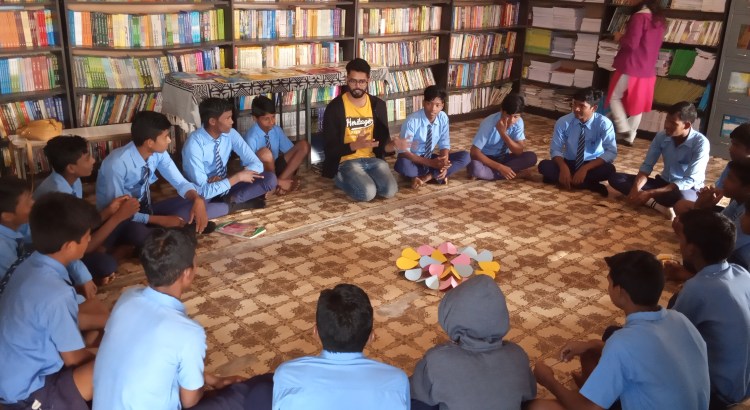 When I look back at the journey of the fellowship, I realise that, I have did things I never imagined of doing. I got multiple experiences and opportunities to learn from them. I remember in early days, somewhere in the middle of May 2018, we were busy with the admissions of the kids. One of the students came to me saying “Sir, I don’t want to go to DAV school”. I asked “Why? What’s the matter?” Because it was quite surprising as many of them had a craze for that school. He responded, “That school is very costly. We would have to buy our own stuff. My parents are very poor and they can’t afford it”. I was speechless. All I did was just gave a smile to that kid. However, I could help, but think on how can a six years old kid understand his financial condition? I could never forget this incident. Through the past year, I have had many such experiences and I will definitely carry them throughout my life. Here are a couple of those incidents which I cherish the most.

Recently, I was introducing three letter cvc (consonant vowel consonant) words in my classroom. While teaching, one of the boy raising his hand said, “Sir, आप अच्छा नहीं पढ़ा रहे हो” to which, the rest of the students immediately responded saying “इतना अच्छा तोह पढ़ा रहे है”. I was disturbed for a moment. But addressing all the students I said, “Not a problem, I will try to teach in some other ways”. Although I was disturbed, I was really happy that I could practice democratic classroom. This was an achievement for me that my student was confident enough to speak out his heart. I also realised the need of finding better ways of teaching. I went back to Vikramshila for a workshop on ‘Early Language Learning’ in January 2019. They suggested an activity called, ‘Blending and Segmentation’ to introduce cvc words. Where, we stick an alphabet letter on the chest of every student and call the sound, student having that sound letter comes ahead and we form the word. For e.g. “m – a – n” After this activity that same kid came to me saying “मजा आया” I was overwhelmed with the joy.

We have designed a ‘Kitab Ghar’ for our children. I have seen the kids from the past year tearing books. That was because they did not find any value in these books, books were the last thing that they were interested in. We had to do something to change this. This made us find the best books for the kids with maximum pictures with one or two line sentences per page. Also it was necessary to create a reading environment where kids would like to sit for a while and browse through the books and pick the one they find interesting. And yes! The day kids entered the Kitab Ghar, the excitement level was on the peak. We just loved to see those happy smiling faces.

Another important part was to make these kids understand the proper way of handling books. I sat with the kids and started introducing them to the book. I did a read aloud session with kids, where I started from the front and back cover of the book, the book’s name, name of the author and illustrator even publications, and they were enjoying it. We started following the same steps on daily basis. Now, when we do a read aloud session, kids start giving me the instructions, some of the students have even started identifying authors and publishers. We have also formed a ‘Kitab Ghar Management Committee’ which is responsible to take care of the books and also arrange them as per requirement. We came across a kid who was willing to take away a book to the hostel. We asked him not to do so, however he can come down anytime and read his favorite book. This incident was a classic example of the growing interest for the books among the kids, if a kid wants to take away a book that means he likes the book and loves reading it.I got the opportunity to visit the multiple portable cabins to conduct the ‘Mandala Workshops’ as a concentration building activity. Starting from Rokel and Balatikara porta cabins of Sukma, I conducted the workshop in four more porta cabins of Bijapur district with the students from different age group. The response was so amazing that along with the students, teachers and care takers also came up with beautiful Mandalas. After a couple of weeks I started receiving letters from kids expressing how wonderful it feels while making Mandala and when they complete it, they can’t believe that they have made an art piece. They also mention that, when they feel sad and disturbed, Mandala helps them overcome their thoughts and calms down. I was thrilled by these letters and I made sure I wrote back to them. Some girls invited me to visit them again to see their Mandalas and I visited them to see their Mandalas and their happy faces.

I was yet struggling to find right answer to my question, “How children learn?” And I found the answer in a much unexpected way. Everyday we were being served lunch in school, we used to have our lunch in our staff room wherein the children had their lunch in the dining area. I had been observing that there is huge amount of food was wasted regularly. Kids weren’t finishing their meal completely. Almost every other kid had left overs by the end of lunch which they eventually dumped. I was trying to find the solution to this, and one day my students Ram was displeased by me as I scolded him in front of the class. He did not talk to me throughout the day. I saw him in queue in the dining area and I followed him and sat next to him along with the other kids in a row to have lunch.

I started communicating with all of them and I could see Ram crying. I finished my lunch and had plate clean with leftovers seeing that one of the kid said “में भी सर जैसे पूरा ख़तम करूँगा”. By this time Ram had stopped crying and just like other kids started to finish up everything in his plate and eventually he did. I pampered him and he smiled and this created a chain reaction. Other kids were trying to finish their food as well. When I asked them what’s the reason for wasting so much of food, some of them complained that, they don’t get food if they go back and ask for more, hence they bring the extra food in the first place and later they are not able to finish it. This continued for weeks. I also communicated this to the care takers who serve the food. And now I see the kids taking the food as per their requirement and trying their best to minimize the wastage. This is how I got answer to my question. Kids learn through imitation. Hence, it’s a responsibility of an educator to make sure that, he/she creates such an environment where there wouldn’t be any negative impact on the kid.

The blog was originally published in India fellow blog. The blog is written by Sandesh Bhingarde who is former India fellow working in Shiksharth Sukma.