In Search Of Hidma - 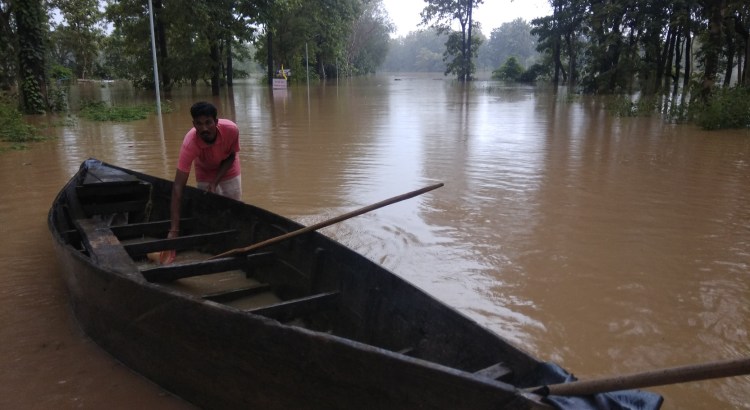 Image clicked by Sandesh (blog author) in one of his field outings in Sukma, Chattisgarh, where he is placed as a fellow with Shiksharth, a non-profit working towards education amongst tribal children.

“It’s been many days now! When will he come? Can someone please cook today?”

This was the conversation me and my colleagues often had in our kitchen ever since our cook Hidma went back to his home for Diwali vacations and for the harvest season.

On one of the weekends, we finally decided to visit his village which was around 10kms away from the place we stayed in. Bhima, one of our colleagues who works in Gyanodaya happens to be from the same village. He invited us to come for lunch at his home and went ahead to make some arrangements for food. I had been planning to meet the local community and I wanted to explore the villages. This was something which was due for a long time. These villages and surrounding areas are conflict affected, and in addition to that there were elections conducted through out Chattisgarh. Hence for our safety we weren’t allowed to visit such places for a while. The elections being over and the overall situation was much better now – this was a perfect opportunity to explore the locality and experience it for myself. The name of the village we were going to was ‘Nilavaram’.

As we were leaving I received an SMS from Bhima that a rooster was arranged for the meal – with all our excitement we get on our bikes and ride off. Just after a while of riding, at a point ahead of us we saw the vehicles were slowing down and there was a check point with cops. This was a buzz kill and we were a bit worried thinking we might get stopped for the questioning. Fortunately, the cop waved at us asking to move ahead and we were back on track. We were trying to figure out the route to reach Turkapara of Nilavaram village as suggested by the host, Bhima. After a bit of a ride and asking people, we finally reached. We spotted Bhima riding a cycle with Hidma. Hidma passes a smile when he sees us. He was holding a bottle which I thought had milk in it and I was surprised. “दूध? यहाँ कौन पीता है?” I asked (the tribal people do not consume milk, they believe that the cow’s milk is only meant for the calf). Everyone cracked up as what I was thinking milk, was really ‘Chindras’.

And thus Hidma was found just like that, and our mission was accomplished. We later visited Bhima’s house and stepped out to explore the village and interact with the locals. Some of the houses were well built and some were under construction, it was clear that the benefits of ‘Pradhan Mantri Awas Yojana’ were utilised by the villagers. There were solar plants installed for generating electricity, this was something which I never expected. The Public Distribution System was working very efficiently as well, however the tribals were looted in a way. The cost of oil was 27rs/litre wherein they paid 30rs/litre. Same goes with sugar and salt. Convenience fees, you might call it? Not too many viewed it as unfair though, or bothered with it. The locals sell the rice they grow and consume which they get from the ration. They get 20rs for selling 1kg rice in the local market and they purchase from ration shop for 1rs per kg. What happens to nutrition in this transaction (a hidden cost, which has also been a huge criticism of the PDS system) is clear.

We also saw a good example of subsistence farming. There was backyard poultry at every house. Hens, goats, ducks and pigs were commonly found. The tribal community eats almost every animal and bird that they hunt or raise. It was almost lunch time and we headed back to Bhima’s house. After a wonderful tour of the village, Bhima caught the rooster. We grabbed some utensils and the basic essentials required for cooking and we decided to go to the river which was just 10 minutes walk. Rice and a few vegetables are majorly cultivated here, it’s one of their staple food. Unlike many other states in India where food is preferred either spicy or sweet, these tribal communities have a preference for sour taste. Rice along with ‘खट्टा भाजी’ (sour vegetable gravy) is eaten widely. Another popular dish is ‘Chapda Chiti’ which is a chatni made of red Ants – these ants are almost 10 times bigger than the usual house ants we see. Trees such as ‘Mahua’ ‘Salfi’ ‘Chind’ ‘Tamarind’ ‘Tendu Patta’ and ‘Mango’ are largely seen in the area.

Getting close to the river, I was able to hear the flow of water. After jumping over a couple of huge boulders, we were finally at the river. The flow of the river was pretty clam and slow. I dropped my bag and started walking towards the river, took out my shoes so that I could feel the sand. I saw a ‘water lily’ floating on the river and almost smiling at me. I stepped in to the shallow water to reach her, I touched her and sat on a rock for a while admiring the beauty of nature. I turned back to see what were the other guys doing. I saw them collecting wood to light up the fire for cooking. Asking the lily to wait, I joined them to light up the woods and cook the rice. While we were cooking the rice, I saw Bhima was making a pothole near river. When I asked, what’s the pothole for? He said, the water which comes to this hole will be filtered and would be cleaner as compared to the water directly taken from the river.

I felt like the forest was calling me, welcoming me to explore the beauty. I abided and went off on a trail. I heard Hidma calling behind me and asking not to go any further. I returned and saw that rice was cooked, it was time to cook the chicken. We decided to take a swim before that. By the time we came out of the river, Vaga a friend of Bhima came back with large leaves and a few twigs and he made huge bowls out of it. Oh yes! Of course we were going to need plates. The rooster was cooked and we had our food with Chindras. After having this fulfilling lunch we took a walk – exploring the place more. I went back to my beloved lily. It was peaceful watching her dance to the hymns of the flowing water.

We returned to Bhima’s house. After resting there for a while, we urged Hidma to pack his bag and get back with us.  Hidma denied – he will be staying for a day more as the harvest was yet to be completed, he said. Well, we had success finding Hidma but failed in taking him back to our kitchen. With hearts filled with hope that he would return and restore our lives in the town of Sukma to normalcy, we ended our field trip.

The blog was originally published in India fellow blog. The blog is written by Sandesh Bhingarde who is former India fellow working in Shiksharth Sukma.